I say it looks better than it did.  The long story is that I spent the last couple of weeks working on my Toyota Pickup, redoing the front Axel and Knuckle seals along with the bearings; wheel and trunnion.  It needed them bad, before my study abroad session I had taken the truck in to get an alignment done on it and the shop wouldn’t do it, explaining that the bearings were worn and any changes they made would only last a couple of miles.  So I went about preparing for a fix of the truck.  I had some old parts hanging around the garage, a transmission, transfer case, drive line, and rear 3rd member.  I contacted my favorite shop Dave’z Off Road Performance in Placerville, CA and set up a trade for the parts I needed.  Mark (my Father in Law) was headed out to California so I hitched a ride with him and drug all of my old parts out to Dave’z.  Dave was generous enough to do a straight trade for the parts I needed!  His shop is awesome and I recommend it to anyone who needs Toyota Truck parts.  Fast forward to this July after I got home from Italy, I was able to fix up the front end of the truck and boy did it need it, the seals were all worn out, the grease in the knuckles looked like soup with all of the gear lube in them.  After I had the truck fixed we took it for it’s maiden voyage up American Fork Canyon here in Utah.  Our plan was to have a picnic at Silver Flats Lake and then drive the mountain roads over to Midway, Utah.  We spent the majority of the day out in the mountains, where Inez took picture for her photo class, and I shot some with the digital camera.  We had gotten into the mountains pretty far when we were forced to turn around because some person had decided to try and tow their pop-up camping trailer where it didn’t bel0ng and had gotten stuck.  We turned around and came back through the Alpine loop where we we got to drive through a beautiful aspen forest to Provo Canyon by Sundance.

The driver’s side door has been hanging up on the quarter panel for some time now, and it chose that day to catch the quarter panel and bend it all to heck.  I ended up having to remove the quarter panel and fix the hinges on the door so it would close properly and stop catching the quarter panel.  I also had to bang the dent out of the quarter panel and repaint that section of it to protect it from the elements.  It’s not the best job I have ever done, though in my defense I don’t have any body tools for working on cars, so I had to make do with what I had.  I like it, even if it does look like a bleeding fish 😉 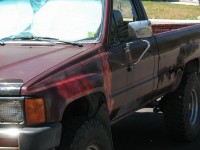 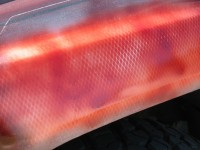 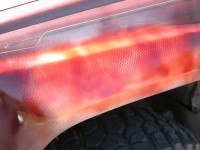 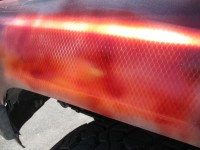